Return to Parts of Speech 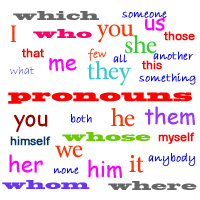 Are pronouns just nouns that have turned professional?

Learn all about pronouns in our new pronoun lesson – you won’t believe how useful they are.

The word pronoun means ‘for a noun’, and a pronoun is a word that takes the place of a noun. If we didn’t have pronouns, we’d have to keep repeating our nouns and that would make our sentences very confusing and repetitive. This helps to make sentences shorter and clearer. The noun is required when referring to someone or something for the first time. There are several different types of pronouns: personal (subject and object); possessive; relative; demonstrative; interrogative; indefinite; reciprocal; reflexive; and intensive. Each type performs a different function.

These show ownership and replace a possessive noun phrase. Please don’t confuse these with possessive adjectives which come before a noun but do not replace it.

Possessive pronouns: mine, yours, his, hers, its, ours, theirs.

These link one part of a sentence with another by introducing a relative clause that describes an earlier noun or pronoun.

Relative pronouns: who, whom, whose, what, which, that.

These can function as subjects or objects in a sentence. Please don’t confuse these with demonstrative determiners which come before a noun but do not replace the noun.

Demonstrative pronouns: this, that, these, those

These are used to ask questions and represent an unknown subject or object.

Interrogative pronouns: who, whom, what, which, whose

These do not refer to any specific person or thing, but they take the place of nouns in sentences.

Indefinite pronouns: some, somebody, someone, something, anybody, anyone, anything, nobody, no one, nothing, all, another, both, each, many, most, other, such, none, few

These are used for an action or feeling that is reciprocated referring to previously named nouns. The reciprocal pronouns are “each other” and “one another”. Each other generally refers to two nouns; one another to three or more.

Reciprocal pronouns: each other, one another.

Reflexive pronouns: myself, yourself, itself, himself, herself, ourselves, yourselves, themselves

These are used to emphasize its antecedent (the noun that comes before it). The meaning of the sentence doesn’t change if you take out the intensive pronouns,

it just has a different feeling because it lacks the added emphasis.

Intensive pronouns: myself, yourself, itself, himself, herself, ourselves, yourselves, themselves

Permanent link to this article: https://englishyourway.com.br/parts-of-speech/pronouns/